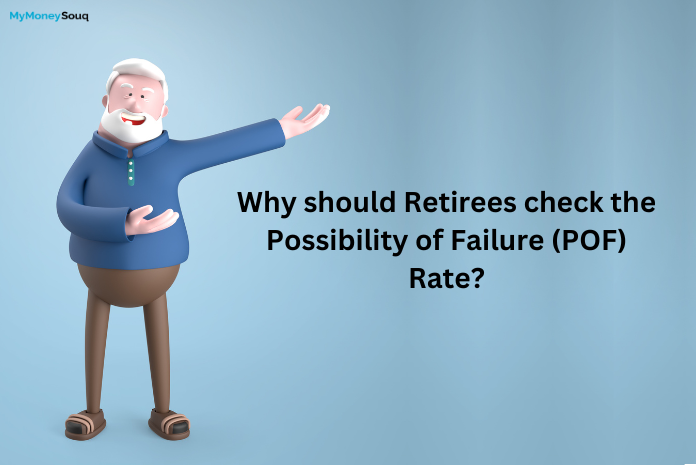 The POF rate is a mechanism used for finding out the person’s retirement savings to measure adequacy. It estimates the chances of retirees becoming bankrupt prematurely.

The chances of failure of a retirement portfolio rely on the life expectancy of an individual. The rate of investments is that percentage which the retiree estimates to take out his money from the allocated portfolio and it depends on the fluctuations of investments. This failure rate is also known as the ‘probability of ruin’.

What is a possible failure rate?

It has become more significant to calculate the chances of failure for retirees because the ‘avg life expectancy has increased. After retirement, there is a life with more years to live and you need finance during that period.

There was a study conducted on ‘retirements saving withdrawal rate’ in the year 1998 by Trinity Unity Finance professors. In the study, it was observed that withdrawals which are more than 6 percent during the year from the ‘retirement portfolio’ led to a prominent failure rate.

The 6 percent number relied on retirees who are having a maximum portfolio without any fee or any tax applicable to them.  There are many factors that are beyond the control of the retirees such as volatile market conditions and loss of savings due to taxes and other fees. At that time using a withdrawal rate that is below 6 percent would minimize the chances of failure.

Click here for Important financial lessons that you overlooked

The safest withdrawal option is to withdraw at 4 percent. Even four percent has a high chance of failure during a certain period of economic conditions. These economic conditions are recessions, slowing down of the economy, and other situations.

Retirees put a huge portion of their investments in stocks. They may experience a lot of return on investment after retirement. During this period they should safely withdraw four percent or maybe higher without completely zeroing the balance.

If the market goes through a period of a long recession and there is a downside of economic growth then even at that time withdrawing at a 3 percent rate may be a possible failure.

With this, we can understand that there is no certain fixed percentage of withdrawal. It all depends on the situation of the market and the amount of withdrawal.

The chances of failure also depend on the volatility of an investment. Risky investments may earn high returns and these returns are not guaranteed. It is hard to assess a fixed percentage to define and tell to withdraw the investments. The portfolio’s numbers will change more in the high-risk investments; this makes it hard to assess a percentage where a safe withdrawal can be set.

Financial experts suggest a dynamic updating method for the management of portfolios which is recommended allowing to adjust withdrawal percent which will reduce the risk of failure. This can be done rather than relying on any certain percentage for withdrawals because the future is uncertain.