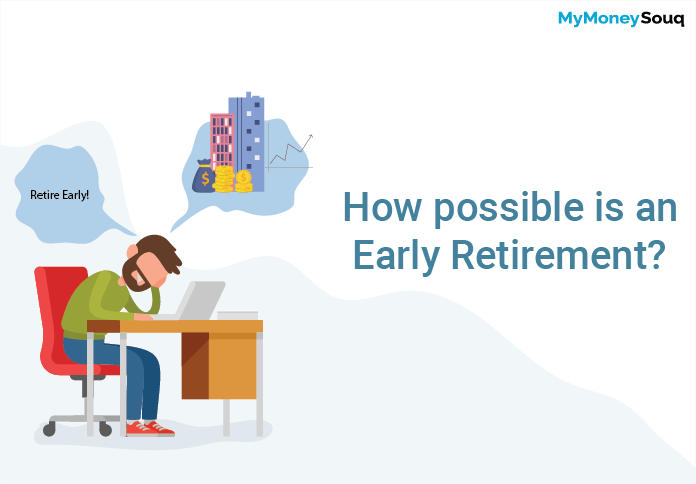 What does early retirement look like? Is it a time when you stop working for money and start doing something you enjoy? This may still involve paid work but as the saying goes, “If you love what you do for a living, you’ll never work a day in your life.” Or is it a time when you can devote yourself completely to your hobbies? Whatever your dream is, you’ll need to plan for it and the earlier you start the better.

Why Starting Early Is Important?

The magic of compounding is why you must start early if you plan to retire early.

From the above, you can see that although the 20-year-old saved 3 times as much as the 40-year-old, his investment grew by 5.5 times.

Save Before Your Spend

When you receive your pay cheque you should pay yourself first. This simply means setting aside a percentage of the money you receive. The money should be invested in your future. Most people spend their money and save what is left at the end of the month – of course there is rarely anything left. By saving and then spending, your financial future is secure.

Develop Income From Other Sources

To retire you will need income from sources other than your salary. Using the money you have saved, investing in assets that grow in value over time is the best solution. These may be financial assets like shares or other investments like property. The best strategy is to diversify your investments. This diversifies your income streams which reduces risk.

Can You Retire Early?

Income determines our standard of living. To retire you must generate a liveable income separate from your salary. The alternative is to work until you die or live on social security in your old age. For most people, neither of these two options are attractive.

Unless you marry money or inherit it, most people must work for their financial security. Marrying for money and waiting for an inheritance carry significant risks of their own. Self-reliance is the safest way, but it takes time. There are several things you can do to make the journey faster.

Your Money or Your Life

The more you save the faster financial independence will arrive. It will also mean that you will be used to living on a lower level of expenses. For example, if you took an extreme case and saved 90% of your income and spent 10%, every year in work would be the equivalent of 9 years in retirement.

There is a movement called F.I.R.E. (Financial Independence, Retire Early) which proposes saving 70% of your income. The movement is founded on the principles in the book published in 1992 called ‘Your Money or Your Life’ written by Vicki Robin, Joseph R. Dominguez, and Monique Tilford. This stone-cold look at our consumer society makes you think about what is important.

Don’t Save A Fixed Amount

As FIRE suggests, you should not save a fixed amount but a percentage of all your income. This means bonuses too. When you get a raise save it, don’t spend it.

If dividends were reinvested the profit would have been $5,416 or very nearly 2.5 times the sum without dividends reinvested. This strategy is hugely beneficial to long term investors.

In Western society, men who retire are more likely to die in the first 18 months than at almost any other time in their lives. There are many theories why this may be: loss of structure to their days, loss of authority and lack of purpose could all be contributing factors. So not only is it important to plan towards your retirement. It is also important to know what you will do in retirement.

Is early retirement possible? Yes, but you need a plan to get there and the determination to see it through.

Key points are: Start early, save before you spend, develop income streams that are independent of your salary, save as much of your income as possible, remember to save bonuses and raises, always reinvest dividends and interest and have a plan of what you want to do in retirement.